Movie Review: A Shark Wants You for Dinner, What Would You Do? Diving in The Shallow 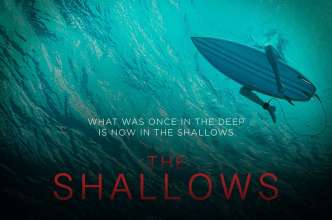 Released on June 24, 2016, The Shallow was directed by Jaume Collet-Serra and is a drama slash thriller that both pleases the eyes and tenses your muscles. The film forces you to put yourself in the main character’s shoes and asks you constantly what would you do if a great white shark trapped you on a rock determined to have you for dinner? What would you do? With only two major characters played by Blake Lively and a great white shark and a few minor characters, we dive into the scary unknown.

The film starts off on a slow ride introducing Nancy, a medical student who had recently lost her mom to what is assumed cancer and is in search for some inner and outer peace. She decides to go surfing on a secluded unnamed beach and unfortunately finds herself wounded and trapped by a great white shark. At this point, the film’s slow pace picks up with Nancy struck on survival mode using nothing but her medical skills and her needed wits.

Lively did a great job bringing the serious tone to the film. There was a good number of tensed, daring, and jumpy moments that would put you on the edge of your seat. They hinted a could-be love interest named Carlos played by the talented and handsome Oscar Jaenada, but the director made a good decision on not allowing it to be the focal point of the film. The CGI was incredible. There were times where the shark looked very real along with its movements and actions. The beauty of the island located somewhere in Mexico was pleasant at times and the crystal clear water looked very refreshing

When it comes to plot, there was a lot of exposition, maybe too much. They acknowledged Nancy had family who would miss her if she disappeared, but the manner in which it was done was very annoying. Films today include a new type of communication method between characters having the screens of their cellphones zoomed in for the viewers to see. This could’ve been reduced to just one scene, but it appeared constantly. A simple phone call would’ve sufficed for an exposition of Nancy’s character or her telling it to Carlos in their ride to the beach.

The best part about this film was the exclusion of flashbacks. Usually, in thriller and drama movies when the character is placed in a tense situation they tend to include a flashback for exposition or filler information. The Shallows had Nancy (Lively) trapped with easy opportunity to include a flashback, but they did not use it, except once, which you will see if you decide to check out this film. Great call Collet- Serra! He kept the viewers’ attention on the situation at hand, giving also a roller-coaster of feelings and reactions in every scene. Because of the director’s smart calls in creating this villainous shark film, The Shallows is mind-bottling, heart skipping, and an entertaining movie to pass the time.

-Written for a writing, editing, and publishing course.